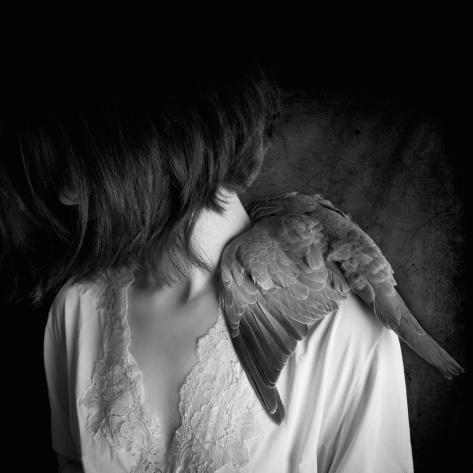 The doctor said it was too late. Soft medicine would be of no use to me now. I cried into my pillow as the visions of what I still wanted to achieve in my life flashed before me then ran off into the bushes.

Don’t move. If you do, you could bleed to death in less than three minutes.

I practised being dead, resisting every urge to cough or twitch, but first I called the children to hear their voice in case…

And as I practised being dead – getting better and better at it – a familiar face ventured almost apologetically into the room. So grateful was I to see him one more time that I cried in earnest. It wouldn’t matter if I bled to death now.

That was around two years ago. Two years, over 600 pills a month and the will to prove everyone wrong. Whenever anyone says ‘no’ to me, I make it my mission to prove them wrong. The doctors had been telling me for years that I would be on medication for life.

‘Are you sure that I won’t be able to get off these pills one day?’

That was their No. Not mine. On my miraculous journey back to health from a chronic kidney disease, I have many people to thank but above all, I owe my life to Dounne Alexander, founder of Gramma’s International. My cousin had drawn my attention to this woman and her amazing health food products. I ordered several sachets of Zara’s Herbal Tea. If it was too late for soft medicine, as my nephrologist claimed, then it could hardly harm me, could it? Suffice it to say that within a few months of taking Zara’s Herbal Tea, my blood values improved by 60%. The very same doctor who told me I would be on medication for life now assured me that it was not unthinkable that I could be off medication if my progress continued. That day is now. Against all odds, and after eight years of taking the strongest medicine on the market, I am now totally off medication altogether. Thank you, Dounne. Thank you so, so much. I could be dead, but instead I’m laughing.

Laughing. Dreaming. Seeking the truth that waits, patiently, in little things. Finding the strength to return to my destiny, unafraid. Recognizing angels, thanking angels, joining their ranks, for we are all somebody’s angel when the time is right. Throwing myself at life. Yes, all things are possible: everything conceivable and inconceivable, is.

What was inconceivable thirty years ago is now a dream come true: I’ve finally received my PhD in Creative & Critical Writing after six years of hard work, doubt, inspiration, personal calamity and all the things that can happen to you over such a long period. At least two or three times a year I almost gave up this dream, but then I remembered that I had waited almost 30 years to make this dream come true. And I remembered my children, who never failed to believe that I was some kind of superhero who could achieve everything I set my mind to. And I remembered my partner, willing to go through thick and thin with me, willing to carry me around the house in my worst days when I couldn’t even walk. I remember him saying, ‘I’m so proud of you.’ For these people, I soldiered on. And for God, who slipped me this task all those decades ago, in a dream, in that realm beyond reason, where I am least able to resist. God whispered. And waited. And sent in reinforcements. I’m exhausted and happy. What difference does it make if I can’t see myself returning to an academic career, this achievement is still absolutely what I’m about: live your dream and don’t give up!

So, what do you do after you’ve been through all that, after you’ve been fighting you entire life, in one way or another, and you come out the winner? You cultivate the art of satisfaction, for one. I’m simply happy to be here. Whilst I’m here, I’m going to make myself useful!

After all those decades in the classroom, do I miss teaching? Sometimes. I remember the fun I had with the students who took my Creative Writing class. There’s something incredibly intense about discovering our own stories. I’m not talking about autobiographical writing, but simply about finding, about trusting your own voice. It was an honour for me to help so many students find and share their voice. Like Kent Beausoleil, an American priest who took my Creative Writing Summer Workshop:

Over a hospital tray

I ask my mother of regrets.

I feel the lie.

And the empty liquor bottle tips.

I feel proud to be a part of that. No need to regret no longer being a teacher or lecturer. I’m an author. Always have been, always will be, dancing with my devils, walking with the angels, keeping an ear open for what is whispered to me in my dreams.

What genre is your book? Do you write in other genres as well?
My books have been classified as women’s fiction, post-colonial fiction, British fiction. Adult fiction. Verses Nature won’t be easy to classify. I don’t mind as long as it ends up in the top ten (lol). Verses Nature has, as an overall theme, and in common with all of my fiction, the notion of self-interrogation and growth. It’s about carving out space for personal development. This can’t be done without also coming to terms with one’s sexuality – I know, I’ve tried! Sexuality, thus, plays a significant role in all my fiction. Doesn’t mean I write what generally goes as erotica, though. I don’t. I once tried to get a man to understand what I meant by the term intellectual erotica. When he still couldn’t get it, and I was at the end of my tether, I barked ‘high-brow rumpy-dumpy!’ He got it.

One of the main characters in Verses Nature is an old man called Tatar. Outspoken, verging on the vulgar. He’ll say:

Men shouldn’t assist at childbirth if you ask me. She’ll be screaming, farting, crapping, saying vile things to and about you and you, idiot, are sposed to just stand there saying Yes darling as you squeeze her hand or mop her friggin brow? Then there’s the pushing and gushing and out it plops as from a sewer. Puts a man off for life. You’ll never really want to be in there again, But we’re not allowed to say that about wifey, are we?

He’s full of tips:
You should get Him not to wash for a while so he stinks of man, then you give him a royal blow job, he’ll spray like a whale, I swear.