Apart from editing and a final revision, I finished the translation of Joan Barbara Simon’s ‘Verses Nature: In the Beginning Was The Heat‘. Initially I revolted against the male protagonist, Tatar, as it was very conflicting to put myself in his skin, his mindset and especially his words. I wrestled with him for a long time, but as he is an undeniable reality that can be seen in many lights (and should) I put in every effort to genuinely do him justice in German and reflect who he is or might be for that matter.

To bond with the female counterpart, Carmina, was essentially ‘easier’, as her struggle is a well-known and yet potentially kept silent reality of too many women, too many female narratives that remain hidden in the bedroom drawers of pain, shame and agony. She is made of flesh and blood, of bad and good, of pain and pleasure and she is done with apologising, with justifying herself and selling herself short. She rewrites her own story and as hurtful as it is, she changes the predestined conclusion of her life.

Even though Verses Nature contains raw sexual matter (so what?), it does not deserve the common, depreciative and cheap stigmata associated with erotic fiction. It is indeed literary if one dares to take the time to dig deeper, read beyond every word and sense and dive into each page without preconceptions and judgements. Each page takes and needs its space in meaning, the process is akin to the musing of a painting, a portrait, as intimate as it gets, to swim through the features and textures of a face, a personality that is deeply flawed, human, hurt and lusting after life. Every time that I thought that I had figured them both out, I was wrong and rediscovered a new aspect that could be closer to the truth. When approaching Verses Nature, one has to do so with an open mind, it takes time and a lot of unburdening, but I managed to sincerely appreciate it, it challenged me and I do not say this because I consider Joan to be a dear friend of mine or because she chose me to be the translator, but because these narratives matter and need to be told and dissected. Even if Tatar might come across as an incredible asshole, a misogynist, a nonsensical skirt chaser or Carmina as threatening, vulgar and uncomfortable, they stand utterly exposed and therefore vulnerable and that’s the point, not to be judged, but to be understood, analysed. Together, they are representative of the social, political, religious, familial and emotional issues that still have a long way to go in today’s society. They cannot be reduced to black and white shades, they are in no way extremes or stereotypical binary oppositions. They might be you and me, then and now, they are intertwined and consist of common dysfunctional and functional features that we all possess and control more or less. Verses Nature is holding up the mirror to your face and challenges you to keep looking. Maybe if you figured out how to gaze, it will break. 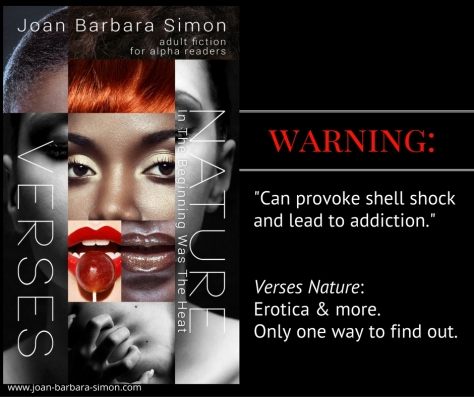 Thank you, Laura, for the excellent translation into German and for this spot-on evaluation of my book! I’m continually tweaking the book’s categories. After adding the subtitle: Memoir Of A Lonely Hotwife, it shot to #1 on amazon yesterday. True, the rankings are updated hourly, so fame is short-lived but the pleasure is nonetheless sweet. I like the word memoir as it shifts the book to a place where fiction and non-fiction may co-reside. Just as Verses Nature can be seen as erotica and more, the social, political reality it depicts also makes its fictional characteristics move beyond fiction to become that ‘more’ which invites us to keep questioning. So readers, if you feel like a challenge, here it is, ready and waiting.