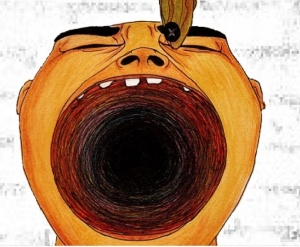 Unknown great man William Thomas Johnston. Aching, but never giving up. Suffering into truth, Aeschylus-style.
Take the time to visit his blog. Take the time to buy his book. He’ll be set reading one day and if not, he bloody ought to be.
You say you once saved a man’s life but that’s not true. How can you know how many other lives you’ve saved unwittingly? And as for that ungrateful bastard who didn’t even think to tip you after you had saved his life, don’t let it get to you. The number of people I’ve said Hello to, who’ve turned around and looked at me as though they’d just been spat at. Reason isn’t always reasonable!

‘I once, I am, and then’: came more:
God is nothing without his courtroom. He is a very bored, arguably theoretical being.
I have always refused to be brought to my knees by these things any longer than is necessary to rest.
When I write, I pretty much consistently ask myself if the average slightly drunk person could pick up this poem and read it as well as enjoy it.
The better I get, the more I must improve. The more often I write only adds to how often I should.

(from the private writings of W.T. Johnston)

I once flashed three hundred and fifty people
Long blonde, curvaceous, thick white stockings, thick everything in a knee-length white dress “a most unladylike way to sit,” said the adjudicator, but God did the crowd blanket me in smiles
I once climbed peaks
Arms burning worse than the sweat in my eyes, scrambling, rocks slipping, legs dangling, prayers in every gasp as I strain for another handhold, toehold, for a small tree’s roots to hold, no rope
Bleeding calluses, scratches upon thick skin, upon blisters, a grasp so strong I once straightened a bent screwdriver with my bare hands
I once saved a man’s life
Blue face, unconscious, screaming girlfriend, frail marine in my arms, squeeze, one palm a fist the other laid over it, push, choking on the steak I served him, colors returning to flesh, I kid you not when I say he finished his meal after returning to the world and did not tip
I once, and with all sincerity, asked a doctor if I was dying
Clothes cut away, naked, bloody from head to toe, three men asking me to tell them where it hurt, probing hands over an entire body of agony, weeks with a scab for a torso, months of shattered leg and fractured collarbone, and a lifetime of double looks crossing the road
I once lost my mind
Blinding white light in my insanity, Jesus delusions, psych ward scrambled eggs, so sleepy psych meds to this day, voices insistent in an empty room, electroshock therapy, missing years, foggy memories, and a decade wasted adrift in the groggy
I once wrote a book
Paper bound existence, agony adrift in its pages, catharsis, grey matter smashed between covers, lifetime ambition, one hundred copies sold, three hundred sixty five days of sweat, no best selling miracle, merely typed pages for sale, merely my thoughts for sale, merely paper
And what now
Lock myself away, the trap door to my hermitage the next great American novel, beer every night all night until the sun rises and then more, budget blown on camels with no humps, studies placed on classes with a career one merely settles for, fistfuls of friends so true you question their presence, life so long you’re closer to the end, welcoming death’s shadow with patience, budget so tight it bursts the zipper, and when the zipper bursts you merely wear the one pair of shorts, belly growing fat and stretched unrecognizable, hairline so far back it leaves old photos a joke, hands that cannot recall being held
But enough of what now, enough of what was, what next
Find it, throw myself from a plane with my life wrapped in silk, kiss a beautiful creature, carve at a hunk of wood for three weeks and give it to a stranger, sell seashells to tourists, sing badly on a street corner until I have enough change for dinner, dance badly until I collapse, turn my back on every sharp-beaked tentacled memory, mean it when I wrap arms around someone, climb a far-off mountain until I am the first white man anyone has ever seen and tell them all how much I love them, pick an Indian god and find her, pick a Native American god and bring the animal back to life, swim hard every day until I can dive to the bottom to sit cross-legged in silence, stop seeing potential in my bank account alone, fast until I am flush with food stamps
I do not know if I can accomplish all of these things but I will unsheathe the moment again
As surely as I looked just like my mother in drag.

(William Thomas Johnston, published in his blog, One Manner of Hunger.)