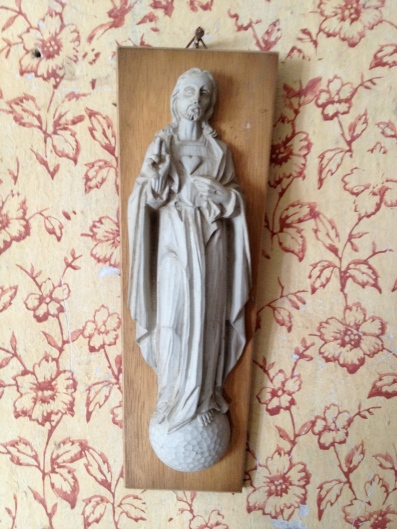 INTERVIEWER:  How did you get your background in the Bible?

FAULKNER:  My Great-Grandfather Murry was a kind and gentle man, to us children anyway. That is, although he was a Scot, he was (to us) neither especially pious nor stern either: he was simply a man of inflexible principles. One of them was everybody, children on up through all adults present, had to have a verse from the Bible ready and glib at tongue-tip when we gathered at the table for breakfast each morning; if you didn’t have your scripture verse ready, you didn’t have any breakfast; you would be excused long enough to leave the room and swot one up (there was a maiden aunt, a kind of sergeant-major for this duty, who retired with the culprit and gave him a brisk breezing which carried him over the jump next time).

It had to be an authentic, correct verse. While we were little, it could be the same one, once you had it down good, morning after morning, until you got a little older and bigger, when one morning (by this time you would be pretty glib at it, galloping through without even listening to yourself since you were already five or ten minutes ahead, already among the ham and steak and fried chicken and grits and sweet potatoes and two or three kinds of hot bread) you would suddenly find his eyes on you—very blue, very kind and gentle, and even now not stern so much as inflexible—and next morning you had a new verse. In a way, that was when you discovered that your childhood was over; you had outgrown it and entered the world.

(from an interview given to Paris Review, 1956)

Children cheating. Love it. And so true! I’ve touched on the topic myself:

We’re baptised but it doesn’t really mean anything. We kind of mutter a prayer on a Sunday before we eat dinner. That’s it. And we’re supposed to say prayers before we go to bed, but no-one ever checks and I’ve forgotten the words at the end.

Gentle Jesus meek and mild, look upon this little child…

Then I la-de-da the lines I can’t remember and then it ends something like;

If I should die before I wake, I pray the Lord my soul to take.

Something like that. But he never gives me any of the things I ask for. You know what grown-ups are like.

On a Sunday we have to go to Sunday school. They never go to church, but they insist on sending us to Sunday school, don’t they. Cos Wendy and I are Brownies, we have to go dressed as Brownies. It’s really boring but we can’t say we don’t want to go. One particular time, the nearer we got to the church, the less we wanted to go, so you know what we did? We walked around the church block until the service had finished and the people started coming out, then we went to the sweet shop and spent our tuppence on sweets. They never found out. They’ve never once asked us what they talked about at church, so we know they’re not really interested.

Am I like them? I have some things in common with my mother, yes, that’s true. I got my brains from her, she says. She could have done great things if she hadn’t started having kids and got lumbered. I’ve got her big feet. I hate my feet. But other than that, I don’t think we’re similar. I hope not.

I wouldn’t say I was really happy but then again, I wouldn’t say I was really sad. I don’t think about it like that. It’s just a normal childhood like anyone else’s. We’ve got our own house and we’ve got a car… I’ve got some nice clothes. Maybe… don’t tell anyone I said this, but… maybe if I had a nicer family… nicer parents, like… But anyway, it’s not over yet, not quite, and maybe it’ll get better. Yes, I hope it’ll get better at the end of the summer. The angels will roll the stone away like they do in the Easter Song… and if not, well, when I’m grown up, it’ll be my turn.

The angels rolled the stone away,

It was early Easter Sunday morning,

Jesus had a sad life as well, didn’t he? I mean, they killed him in the end, didn’t they?

(from Long Time Walk on Water)